Magic doesn’t make sense. I don’t mean in a fairytale sense, as in “why can we turn people into turtles,” I mean how it seems to obey one set of rules today, and a different set of rules tomorrow.

This thought first occurred to me last week when I was having a luncheon with a sorcerer friend of mine. We were discussing his fascinating ability to rapidly cast magic spells when I made the off-handed comment, “it must be nice to be able to quickly cast something such as a burning hands spell and then follow it up immediately with a firebolt to finish off anyone who managed to avoid the brunt of the blast.”

For a moment, he looked at me, confused, and then commented that surely I had meant it the other way around; that what I described was impossible. “No,” I replied, I had meant what I said. He looked at me in amazement, as if I had just said something profane. “It doesn’t work like that,” he stammered, “you know that combination doesn’t work?” Flabbergasted, I questioned why on earth it would work one way, but not the other.

Several minutes later, we were in an open field where he was to give me a demonstration. “Watch this,” he told me, putting some distance between us, “I’m going to cast a burning hand spell and then follow up with a firebolt – all within a few seconds.”

Just as he described it, sure enough it happened. Within a manner of a few seconds, his fingers flared up and a cone of fire was unleashed. A split second later, a shot of fire came out from one of his fingertips, dissipating into the ground several yards away.

After I acknowledged he had indeed rapidly cast these spells in succession, he told me to now observe him casting the spells in a reverse order. I did so, and what I saw amazed and confused me . The bolt of fire was produced immediately, but my sorcerer friend seemed to be having a hard time with the second spell. It took a full 6 to 7 more seconds before the cone of fire was unleashed.

Confused at what I just witnessed, I asked him what happened. He explained to me that as hard as he tried, the second combination of spells simply proved impossible to cast in rapid succession, but given their reverse order, there didn’t seem to be a problem. “It’s just the way that magic works,” was the only answer he could give me.

After this experiment, I journeyed into my books on magic history and found a curious thing! It was only up until the past few years that magic had spun a rule that prevented such as what I had just witnessed. It is not only sorcerers that experience this phenomenon, but spell casters of every type from the arcane to the divine. I personally spoke with a druid who confirmed that several years ago, magic began to function in this manner. She found it quite annoying.

After probing several universities for information, I finally found a fellow named Fig, a mage of some experience, who explained the exact reason in arcane formula as to why certain combinations of spells produce different results. I have reprinted it here for your enlightenment: 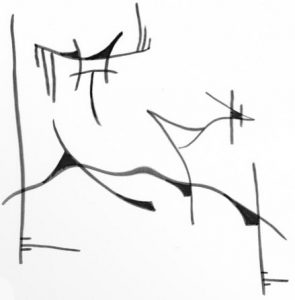 In addition, he told me that it was indeed possible to get around this limitation, but only experienced spell casters knew the secret, and it could only really be explained to someone with the innate ability to cast magic, which excluded me. Upon asking why it changed this way years ago, he only shrugged and told me, “only Mystra knows.”

Immeral Siannodel is an ancient elf of unknown age (he won't tell us) from the Cormanthor Forest who specializes in the study of art, fiends, and ancient civilizations. Formerly a teacher in Elventree, he left his position in search of a new profession before ending up as one of our writers.