Tick Tary Tanner: Back From The Dead With a Message to Faerún 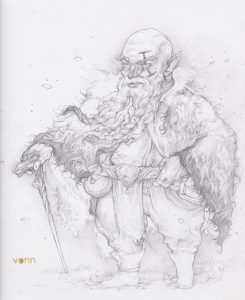 In a shocking turn of events, Tick Tary Tanner revealed himself today as having escaped the assasination carried out by Thay. Looking a bit haggard and with a coat of warpaint on his face, he sounded a bukkehorn, then launched into a speech and gnomish battlecry to inspire all there and to renew efforts against Thay. There was a great deal of shouting, cheering, and several of his close acquaintances rushed to greet him as he spoke.

For the protection of the individuals and organizations gathered there, quotations and names will be withheld.

After the celebration had died down from his initial appearance, he presented our Thunderquill contact with a personally-penned letter addressed to the “Heroes of Faerún”, which follows:

I return with a heavy heart. I failed you. I failed to unite the factions. We sent a fractured army against a powerful nation. The battlefield was one I did not choose or intend, and thousands of innocent people died as a direct result of my actions. I will carry that weight every day until my last.

I died in the crowded streets of Hillsfar at the hands of Thayan assassins. ‘Tis true. But I had a clone hidden deep within the High Forest, ready for me. However, Szass Tam was able to block any such clever magic on my part. My dear companion Driftwood actually journeyed into the Nine Hells, fought Zariel, and persuaded Asmodeus to free my soul from Szass Tam’s prison. It is Driftwood’s story to tell, but I am forever grateful.

I know other adventurers have also fought on my behalf—each wish and divine intervention was a petition to the higher powers to show me mercy. Nothing was wasted. Shiallia embraced me, protected me, and with a kiss, brought me back into the world, new body and all.

Upon my return, I used mind blank and other powerful spells to hide my whereabouts. I figured my friends and foes alike would put the odds of me cheating my death at about half-by-half. I fled to Candlekeep. The followers of Oghma kept me safely hidden in the sanctuary of their vast library for the better part of a year. While there, I studied everything I possibly could about Szass Tam, the Red Wizards, and the Thayans, confident that knowledge would be our greatest asset. Afterward, I left Candlekeep and journeyed south to Chult—in disguise, I was able to track down more Red Wizards, including Szass Tam, during the assault on Port Nyanzaru. I dropped not one, but two meteor swarms on the bastard. Oh, believe me, I let Szass Tam know I’ve returned.

My exploration led me further into the jungles, where I encountered more Thayan schemes and the unspeakable horrors of Elder Evils. No doubt, some of you have similar stories. They tend to follow us, don’t they?

And now, if you will have me, if you can possibly forgive my failures and my subterfuge, I would like to be included among you. No more wandering. No more hiding. I am Emerald Enclave. I am Verdantium. I stand in defiance of Szass Tam and all of Thay. If they kill me again, I will come back again and again—until fate decides otherwise. The war is not over. But we cannot afford another loss.

We have much to discuss.

There will undoubtedly be a response from the Thayans in the coming days, as well as reactions from adventurers all around Faerún. There were whispers at the event of increased aggression against Thay and of a “Verdantium” that Tick mentioned in his address.

As more news comes in, we’ll be sure to keep you updated.

Tick Tary Tanner has his very own certificate detailing his dastardly deeds: I Got Better – Tick Tary Tanner, Archmage of the High Forest and Instigator of Anti-Thay Activities

Published in Adventuring, Factions and War